MASTER CHOJUN MIYAGI AT THE MEETING IN 1936 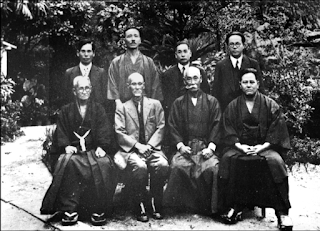 Remarks: This is a part of the meeting records. It appears as an appendix in the book, "Karatedo Dai Hokan" written by Kanken Toyama. Pages 377-392 (Tsuru Shobo, 1960).

The Meeting of Okinawan Karate Masters in 1936

Nakasone: When karate was first introduced in Tokyo, the capital of Japan, "karate" was written in Kanji (= Chinese character) as "Chinese Hand". This name sounded exotic, and gradually accepted among people in Tokyo. However, some people thought this Kanji "Chinese Hand" was not appropriate at schools. In order to avoid the use of this Kanji, some karate dojo wrote "karate" in Hirakana (= Japanese phonetic letters) instead of Kanji. This is an example of temporary use of the word. In Tokyo, most karate dojo use the Kanji "Empty Hand Way" for karate-do, although there are still a few dojo using the Kanji "Chinese Hand." In order to develop Japanese martial arts, I think Kanji for "karate" should be "Empty Hand" instead of "Chinese Hand" and "Karate-Do" should be the standard name. What do you think?

Chomo Hanashiro: In the old days, we, Okinawan people, used to call it "Toodii" or "Tode", not "Karate." We also called it just "Tii" or "Te." It means fighting with hands and fists.

Pronunciation for the Kanji written as "Empty Hand" has only one:
1) Karate

Shimabukuro: Mr. Nakasone, I hear nowadays people call "Karate-Do" for karate. Does this mean people added the word "Do" (= literally means the Way) to the name "Karate" for emphasizing the importance of spiritual training like Judo and Kendo?

Nakasone: They use the word "Karate-Do" in the meaning of cultivation of the mind.

Ota: Mr. Miyagi, do you use the word "Chinese Hand" for karate?

Chojun Miyagi: Yes, I use the Kanji "Chinese Hand" as most people do so. It has minor meaning. Those who want to learn karate from me come to my home and say "Please teach me Tii or Te." So I think people used to call "Tii" or "Te" for karate. I think "Karate" is good in the meaning of the word. As Mr. Shimabukuro said, the name "Jujutsu" was changed to "Judo." In China, in the old days, people called Hakuda or Baida for Chinese kungfu, Kenpo or Chuanfa (= Quanfa). Like those examples, names changes according to times. I think the name "Karate-Do" is better than just "Karate." However, I will reserve decision on this matter, as I think we should hear other people's opinions. We had a controversy on this matter at the meeting of Okinawa Branch of Dai Nippon Butokukai. We shelved this controversial problem. In the mean time, we, members of Okinawa Branch, use the name "Karate-Do" written in Kanji as "The Way of Chinese Hand." Shinkokai (= a karate promotion center) will be formed soon, so we would like to have a good name.

Oroku: Mr. Miyagi, did you go all the way to China for studying karate?

Chojun Miyagi: At the beginning I had no plan to practice kungfu in China, but I found the kungfu excellent, so I leaned it.

Oroku: Have there been our own "Te" here in our prefecture, Okinawa, for a long time?

Chojun Miyagi: There have been "Te" in Okinawa. It has been improved and developed like Judo, Kendo and boxing.

Kyoda Juhatsu: I agree to Mr. Nakasone's opinion. However, I am opposed to making a formal decision right now at this meeting. Most Okinawan people still use the word "Chinese Hand" for karate, so we should listen to karate practitioners and karate researchers in Okinawa, and also we should study it thoroughly at our study group before making a decision.

Chojun Miyagi: We do not make a decision immediately at this meeting.

Ota: Mr. Chomo Hanashiro is the first person who used the kanji "Empty Hand" for karate in 1905. If something become popular in Tokyo, it will automatically become popular and common in other part of Japan. Maybe Okinawan people do not like changing the kanji (= Chinese character) of karate. But we would be marginalized if the word "Chinese Hand" is regarded as a local thing, while the word "Empty Hand" is regarded as a common name for karate as a Japanese fighting art. Therefore we had better use the word "Empty Hand" for karate.

Nakasone: So far the speakers are those who have been living in Okinawa for a long time. Now I would like to have a comment from Mr. Sato, the director of the School Affairs Office. He came to Okinawa recently.

Sato: I have almost no knowledge about karate, but I think the word "Empty Hand" is good, as the word "Chinese Hand" is groundless according to the researchers.

Furukawa: The kanji written as "Empty Hand" is attractive for us who came from outside Okinawa, and we regard it as an aggressive fighting art. I was disappointed when I saw the kanji "Chinese Hand" for karate.

Nakasone: This time, I would like to have a comment from Mr. Fukushima, the Regimental Headquarters Adjutant.

Chojun Miyagi: Well, when I visited Hawaii, Chinese people there seemed to have friendly feeling toward the word "Chinese Hand" for karate.

Shimabukuro: Here in Okinawa, we used to call "Tii" or "Te" for karate. To differentiate from it, we called "Toodii" or "Tode" for karate that was brought from China.

Nakasone: I think we have almost made clear about the name of karate. Now we would like to discuss about the promotion of karate. It is regrettable that karate is no popular in Okinawa at present. We need to find a solution to promote karate in the fields of physical education and martial arts education.

Furukawa: There are a lot of Ryu or styles in karate now. I think we have to unify them at any cost. I hear there are small differences between Shuri style karate and Naha style karate. I think both styles should be unified and we should make Kata of Japanese Karate-do. In the old days, we had about 200 styles of Kendo (= swordsmanship), but now they have been unified and we have the standard Kata of Japanese Kendo. I think karate would become popular all over the country if we had the unified Kata. For example, we can newly establish ten Kata as Japanese Karate. The name of each Kata should be changed into Japanese, such as Junan-No-Kata (soft and stretch kata), Kogeki-No-Kata (= offensive kata) and so on. In this way, we can conform the name of Kata to its content. And I also think we should make karate a competitive sport, so we should study how to hold a game of karate. We would like to make a uniform of karate and standardize contents and forms.

Chojun Miyagi: I agree to your opinion. With regard to Kata of karate, I ever submitted the opinion with explanation to the headquarters of Dai Nippon Butokukai (= national fighting arts association), when its Okinawa branch was established. As to karate clothes, we also would like to make karate uniform soon as we often have problems. As for terminology of karate, I think we will have to control it in the future. I am also advocating it, and I have been making new technical words and promoting them. Regarding Kata, I think traditional Kata should be preserved as old or classic Kata For the nationwide promotion of karate, I think we had better create new Kata. We will create both offensive and defensive Kata which are suitable for students of primary schools, high schools, universities and youth schools. Mainly, we, the members of Shinkokai (= karate promotion association), will make new Kata and promote them throughout Japan. Now there are Physical Education Association and Okinawa Branch of Butokukai. We also have senior students of karate and those who are interested in karate. We, therefore, cooperate with them to study and promote karate. If such organizations and experts study karate thoroughly, we can make a decision about the karate name issue and karate uniform relatively soon. I think the old Kata should be preserved without any modification while new Kata should be invented, otherwise I am convinced that no one will be interested in karate any longer in the world in the future.

Ota: How many karate organizations are there in Okinawa at present?

Ota: Mr. Chibana, how many students do you have now at your karate dojo?

Choshin Chibana: I have about 40 students at my karate dojo.

Chojun Miyagi: There is an opinion insisting that there are two Ryu or styles in karate, namely, Shorin-Ryu and Shorei-Ryu. I think such an opinion is wrong or false, as there is no evidence at all. However, if we have two styles in karate, we can categorize them by their teaching methods. In one style, they do not even differentiate between Fundamental Kata (= Kata such as Sanchin, Tensho and Naifanchi) and Kaishu Kata (= Kata other than Sanchin, Tensho and Naifanchi). They teach karate unsystematically and unmethodically. In the other style, they differentiate between Fundamental Kata and Kaishu Kata clearly. They teach karate systematically and methodically. My teacher (= Master Kanryo Higaonna) taught me karate in the way of the latter.

Ota: Karate masters we know did not go to China to study karate.

Chojun Miyagi: I have heard that Master Matsumura went to China and practiced karate there.

Ota: I thought you created your own karate on your own without learning from karate masters.

Choki Motobu: (laughing) No, I did not create my karate on my own.

Nakasone: Now we know every karate masters have agreed to the plan to establish a karate promotion association. As Mr. Furukawa told us the necessity of founding a karate promotion association, we think the other people also seem to agree to this plan. So we would like the members to start the preparation for establishing it.
Posted by sanzinsoo at 2:39 PM
Labels: Translation: MASTER CHOJUN MIYAGI AT THE MEETING IN 1936, TRANSLATIONS
Newer Post Older Post Home

In Memory of Eikichi Fukumoto Sensei 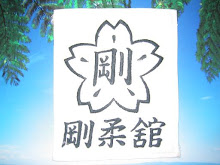 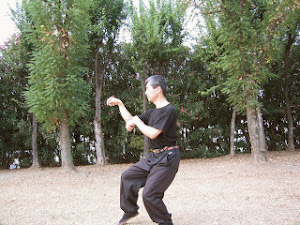 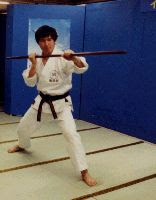